A New Beginning
The Eternal Night
Dawn of the Dragon

Cyril is the Ice Guardian who appeared in The Legend of Spyro series.

Cyril is a coldly confident and predominately prideful dragon, who constantly brags about supposedly royal ancestry. He is brimming with pride and arrogance, claiming that his lineage is that of some long forgotten yet great dragons. He does not hold his tongue when speaking and he can often be sarcastic, Volteer usually being the target of these remarks due to the electric Guardian's incessant babbling. Despite his short comings, however, he knows when he should swallow his pride and do the right thing, admitting that Spyro is the way forwards and that he and his fellow Guardians must step aside.

As a Master of Ice, Cyril's proficiency is unmatched by no one but Spyro in raw power, but it takes Cyril's tutoring to truly allow Spyro to be able to control his element efficiently and with any grace.

Cyril and Volteer squabble a lot, with Cyril disliking the electric dragon's speedy tongue and Volteer annoyed by Cyril's pomposity and pretentiousness. 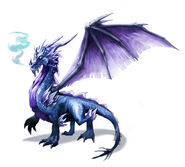 Retrieved from "https://the-legend-of-spyro.fandom.com/wiki/Cyril?oldid=1165"
Community content is available under CC-BY-SA unless otherwise noted.