"Dante's Freezer is a desolate arctic expanse that's littered with the machinery of war...soldiers and weapons frozen forever in the posture of destruction."
—Ignitus

Dante's Freezer is a large arctic island located an unknown distance away from the Dragon Temple, only appearing in A New Beginning. It is large continent covered in ice and snow surrounded by an enormous fortress. It is unknown if this fortress was built by the Dragons, by the Ogres or by the Apes, but it seems that it has fallen into the hands of the Apes. This is where Cynder imprisoned Volteer to drain his powers. The island is ruled by the Ice King.

The harsh climate of Dantes Freezer makes it home to only the roughest, toughest, and most enduring of creatures, for the area is constantly choked with blizzards. Its massive fort walls are barely enough to shield its inhabitants from the cold, and oftentimes make it more dangerous with falling ice sickles and slippery ramparts. Cannons and other dangerous weapons are abundant here and the Apes are skilled at using them against any dragons or wandering strangers. Dress warmly and be very careful…!

Ignitus sent Spyro to Dante's Freezer to free Volteer who was imprisoned by Cynder. It was here that Spyro gains the power of Electricity. The ruler is the Ice King, but he was killed by Spyro in order to save Volteer. 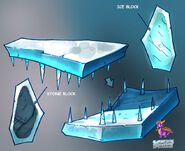 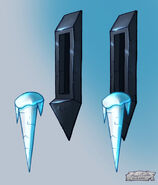 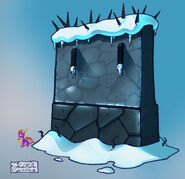 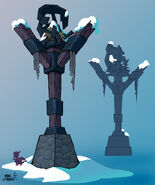 Add a photo to this gallery

Retrieved from "https://the-legend-of-spyro.fandom.com/wiki/Dante%27s_Freezer?oldid=1363"
Community content is available under CC-BY-SA unless otherwise noted.